Ty and Henry finished up our first ever glider that was to be pulled by our Apprentice, very much like what others have done on other channels, especially FliteTest.  Now we are not experts and any advice that you give us we will take into Season 5 next year.  The 8th grade boys fixed the glider and left it for the next crew to work on.  It was still a success though, the kids had a lot of fun and we learned a lot from the experience.  We will definitely be working on big projects like this in the future.

For more information about the program please visit us at: http://www.mesarcfoamfighters.com/

As always, thank you for the support! 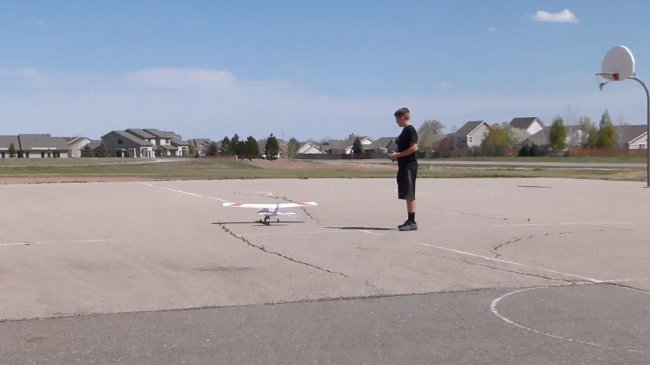 Ty seen here walking the glider before it took off. 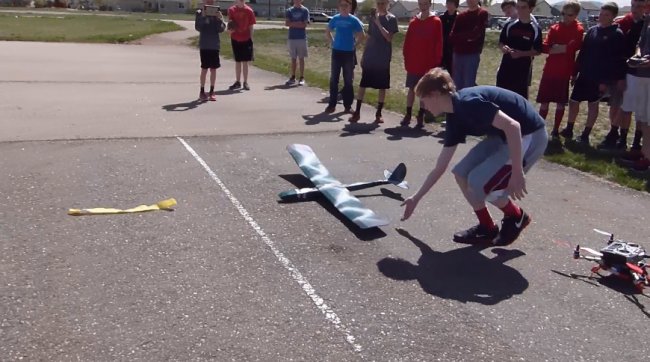 Fun getting it all setup! 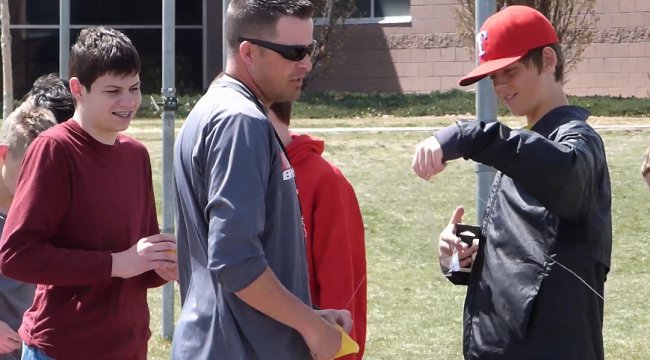 You have to mount a Gopro for something like this. 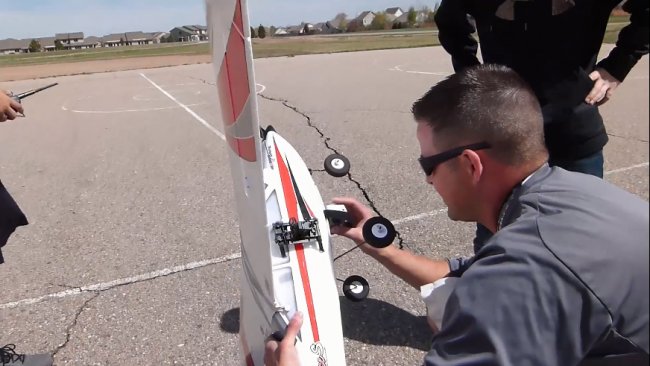 Ty seen here working the release mechanism, making sure that everything is just right. 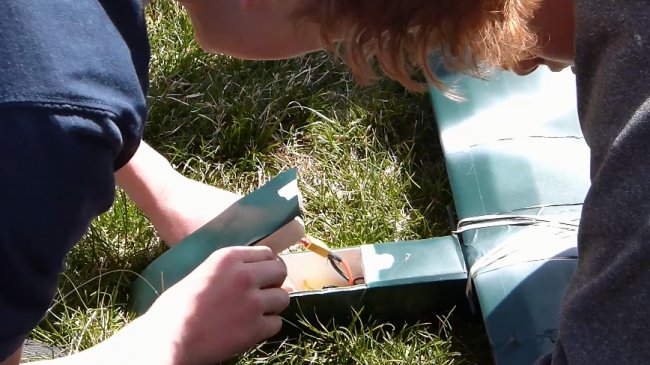 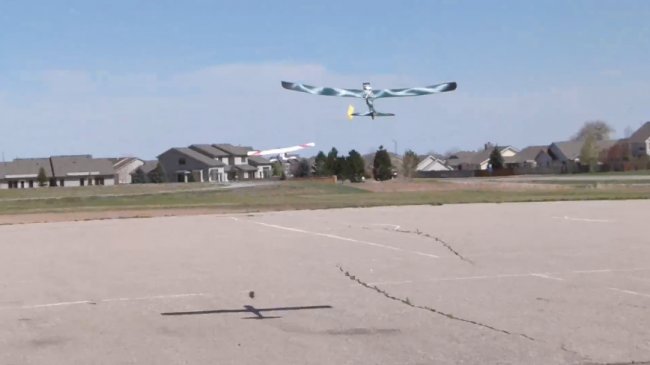 On the first attempt the release opened and the glider landed just behind the infield grass. 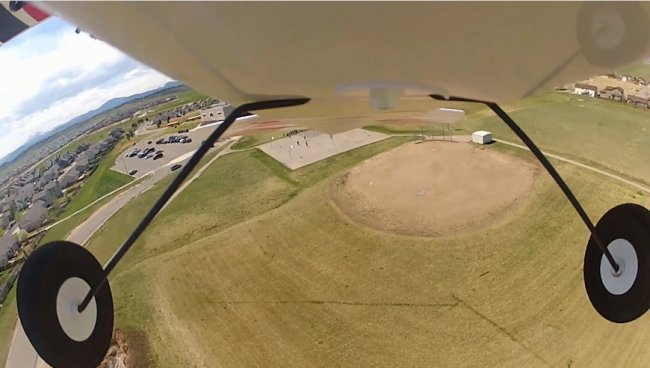 The second chance went great until the plane started to roll and then it got caught up bringing both planes down fast.  It was actually pretty cool! 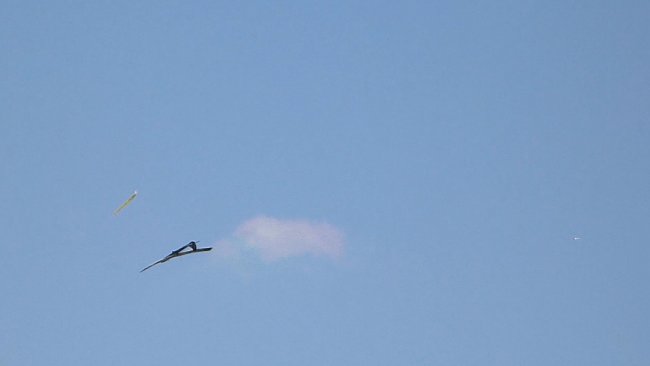 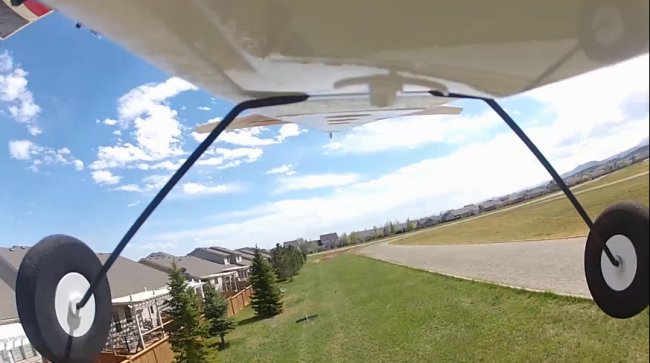 Recap, it was still a success, too much fun!  Way to go guys.  Thanks to FliteTest for a glider plan that the kids were able to build and have fun with. 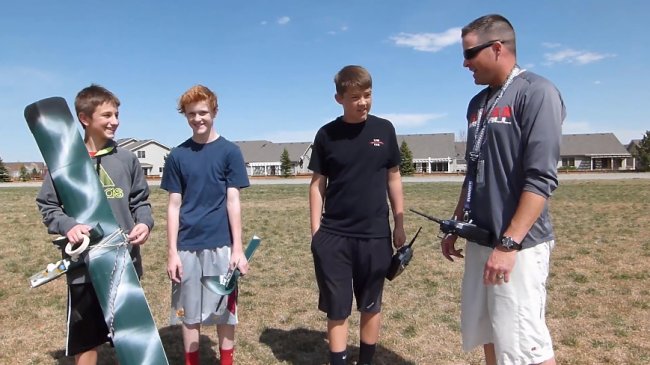 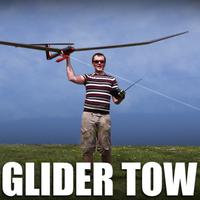 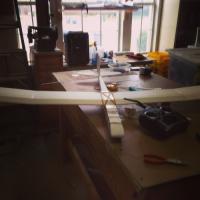 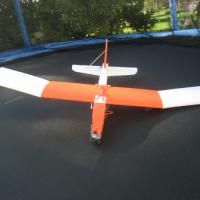 A lot of what I suggest below is true for full sized gliders as well.
In my experience towing too fast makes the glider unstable (in actual fact the controls become very sensitive because of the increased air speed) so only just enough speed to get both aircraft into the air safety - OR - Dual rates on the glider to give reduced control movement on take off.

As soon as things go wrong, excessive movement on the part of the glider for example - The tow aircraft should be able to jettison the tow line. Better lose the glider (which may well land successfully from a low altitude) than the tow aircraft.

Have procedures in place to deal with the failures - AND - practice, tow line break, Instability, landing from low altitude (unless unsafe land direct ahead), tow aircraft engine failure.. All these things WILL happen.


Log In to reply
Sirglider on June 13, 2014
Good try! But so far all my experiences with towing with 2 channel gliders were unsuccessful... Maybe give a try adding ailerons on the FT glider! Good luck and I love your work with students!
Log In to reply
Christopher14 on June 18, 2014
Yes! add ailerons, in a Hi-Start you never touch the ailerons, you just rudder it up. But in a tow it is the opposite, you only touch the ailerons, and never the rudder. That was a good try though, you did better then I did on my first attempt.

I wound add ailerons in the wing tips rather then in the inner portion of the wings. It takes a lot of throw to roll it even just a bit with as much polyhedral as the FTSS has.
Log In to reply
NoUsername on June 13, 2014
Great attempt! Maybe the next tme you can use a FT Duster. Again good job.

Log In to reply
alibopo on June 13, 2014
Great effort! I can only speak from the experience of towing boats - but the golden rule is to point the towed 'vessel' directly at the point of tow. Cutting corners, or other 'helpful' manoeuvring only causes problems for the towing vessel. I imagine much the same rules apply to flying. Trying to 'outfly' or 'outclimb' the towing aircraft and rise above it will just slow down the tow and make things difficult. The glider 'pilot' really needs to be pretty passive until the line is released, to prevent influencing the tow plane.
Log In to reply
stay-fun on June 14, 2014
I've seen the glider tow episode as well, and also that glider had no ailerons. I'm wondering... Is it possible at all to tow a glider that doesn't have ailerons? It seems the gliders always want to start do barrel rolls, which may be preventable with sufficient aileron control.

What do you guys think?
Log In to reply
Christopher14 on June 18, 2014
It is possible, but VERY hard.
Log In to reply
Piet1Fish on July 4, 2014
guys don´t get crazy!
1. put the towline at the top of the tow plane at about the CG
-when the glider pulls up or doesn´t fly exactly behind the tower it wont disturb the tow plane
2. actually i think its way easier towing with just rudder and elevator
-more stable (high dihedral, actually why i like it more then with aileron)
-not much to control and care about when towing
3. don`t get faster then the sailplane wants to
-rudder and elevator only models are normally for low speeds so when they get to fast get rly touchie on the controls (thats why most do a barrel roll)

everything based on personal experience!!!!!
first towing was with my mate. We got an se youngster (http://www.cmc-versand.de/Simprop/0310107-SE-Youngster-arnr-16-0310107.html) as a kit from our club and he has a Fun Cub. absolutly no Problem! Perfectly stable and easy. I figured out when turning a 2 CH airplane has to slightly steer out of the turn so at a left turn the sailplane hast to be controlled slightly to the right. we also towed an graupner Amigo 4 also 2Ch airplane. We are also towing a ,a bit faster, 3ch hangglider and i think its quite a bit harder to stay on track! and u actually need rudder to also slightly control out of the turn so the towline doesn`t get slack!
Log In to reply
Piet1Fish on July 4, 2014
and sry for the bad english i`m from Germany :D