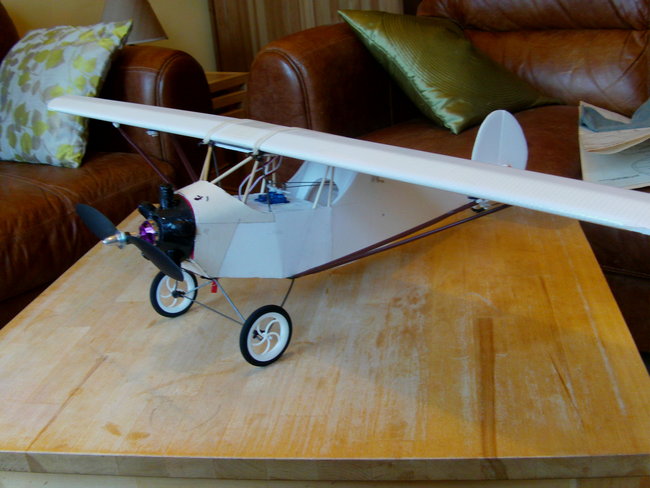 I spotted this plane when searching the web for high-wing vintage monoplanes. I followed a link and ended up at a build article from the June 1995 Radio Modeller of a plan created by Peter Miller. I think it’s a lovely looking plane, and with fairly square sides I knew it would work well in foamboard. I was lucky to find an old copy of the magazine, still with its pull-out plans. 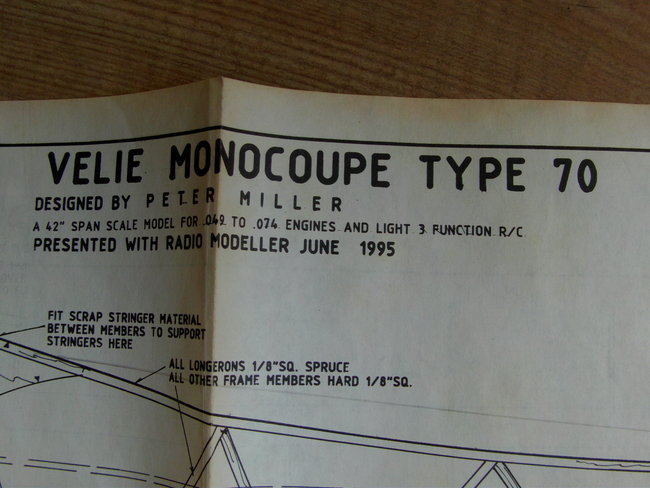 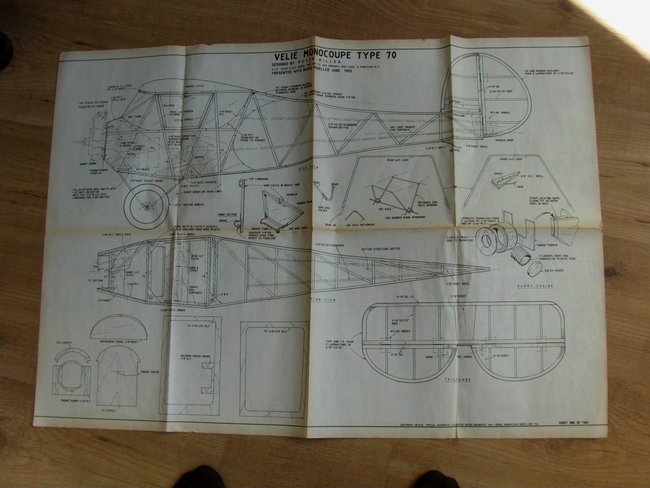 I was able to lift all the basic profiles for the fuselage, elevator, wing and rudder from the plans. I just photocopied the bit I wanted, cut it out and used it as a template to draw around. I modified the rudder and elevator using detail from other FliteTest builds like the Baby Blender.

I was a bit keen to finish the build and didn't keep a good record of the process, but there are a few features worth mentioning.

I used the FT Cruiser wing design, modifying the outline and scaling it to fit this plane, and added attachment points for the wing struts. These were spare servo arms pushed through the bottom layer of foamboard with lengths of skewer through the 'fat' end to stop them pulling through. Only the thin end of the servo arm sticks out. The wing struts are skewers with wire ends glued onto them with thread and CA. With such a large wingspan these are structural not cosmetic. At the wing ends it was a no-brainer to use swing-in keepers to fit the wire to the ends of the servo arms. At the inboard end I created a wire loop that is screwed to the MDF pad. I folded brown insulating tape around the skewers and back onto itself and then snipped the ends to mimic the real fairings. 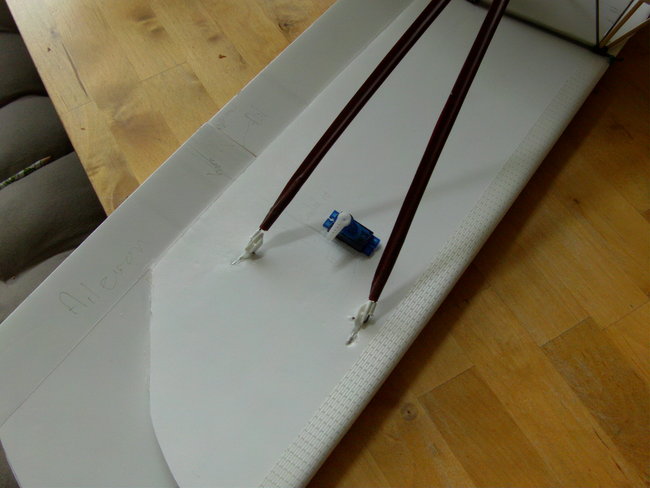 I included two 6mm MDF baseplates for attaching the undercarriage and wing struts. 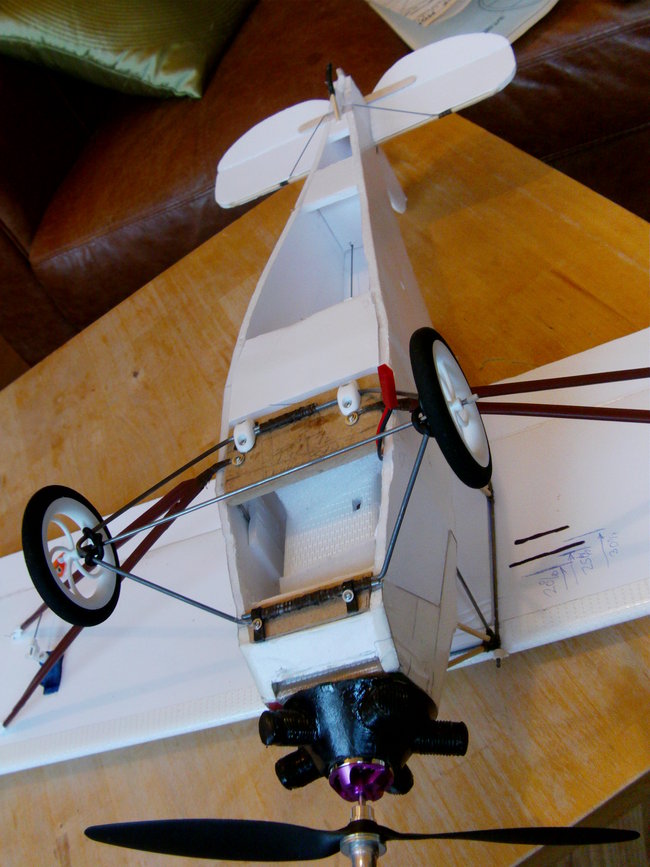 This tail detail should be very familiar to anyone who has built the Baby Blender, including the extra layer of foamboard in the middle from the MKII version. The tailskid is two short lengths of skewer with a spring from a biro pen between them. This is held together by a length of heat-shrink tubing. This arrangement gives a little 'bounce' and also allows some steering. 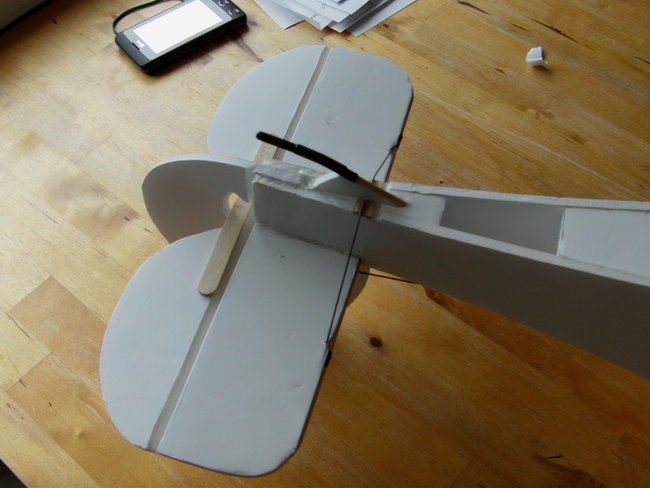 Because the tail was quite narrow I glued a skewer cross-brace into the leading edge of the horizontal stabiliser. Thin wire is glued onto this skewer with thread and CA and runs over the fuselage on a pad made from a short length of popsicle stick. Possibly this detail could be omitted, but it is accurate for the plane and makes it all very stiff. 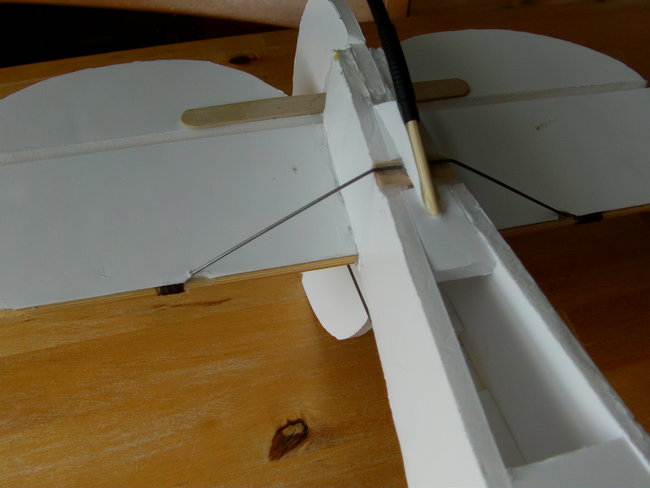 The plans included wire detail for the central wing support. The top is an elongated U shape with downward facing horns at the front to hook the wing elastics onto. The upright at the front is a rectangle with an overlapping join hidden away at the bottom. The small MDF plate is a key structural part of this model - allowing for several screw-on attachments. At the back I glued a skewer to the top of the foamboard bulkhead and used cable ties and glue to fix the wire to the skewer. 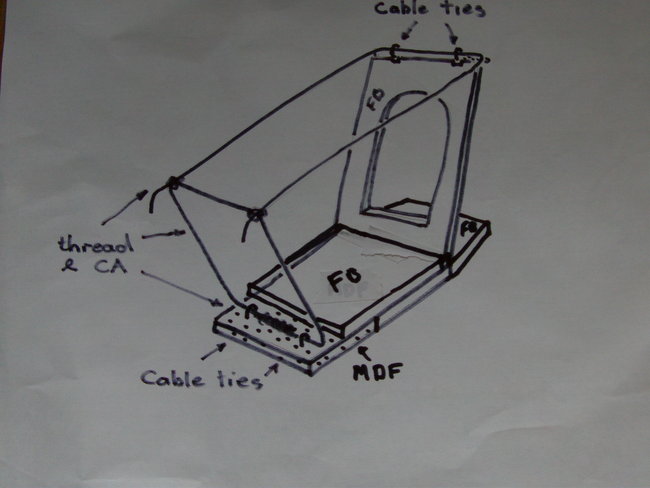 Additional cosmetic frames around the cabin were created using skewers hot glued into the foamboard and lashed onto the wire frame with thread and CA. Here you can also see the wing elastic around the wire hook at the front and around the more familiar skewer at the back. The wing locates into the wire using a shaped foamboard pad glued onto the underside of the wing. 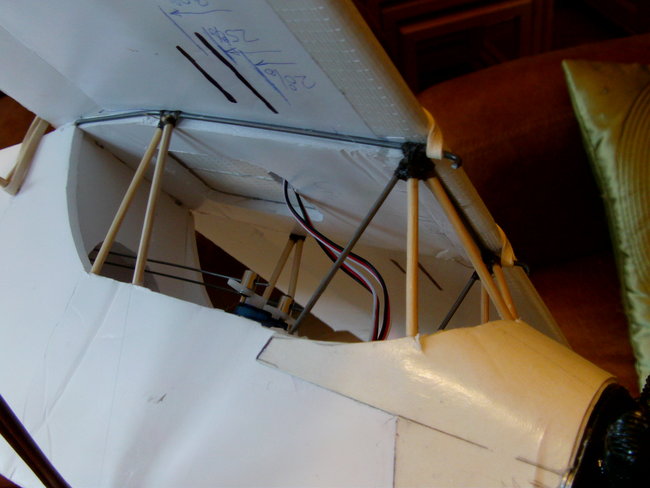 The front fuselage bulkhead was double thickness foamboard with a staggered cut-out at the top to accept the swappable pod mounting skewers and give a flush fit. The turtledeck nose detail took a few attempts. It’s not quite right (according to the plans) but I’m happy enough with it. 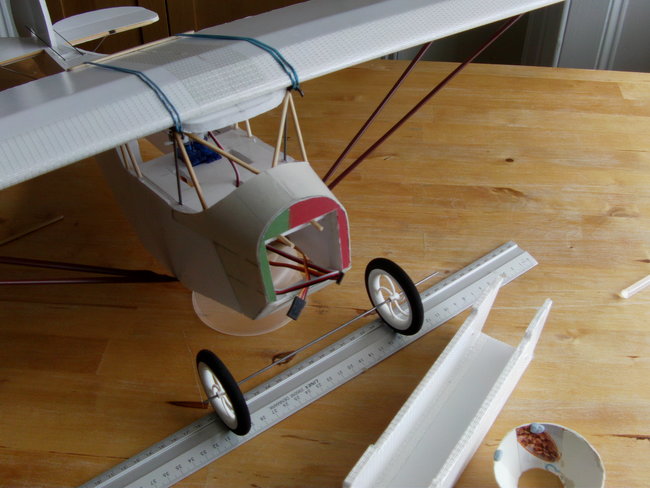 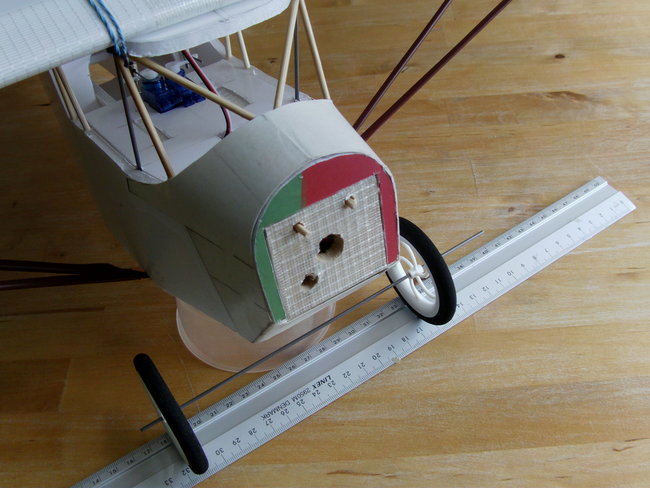 Above - inside the cabin you can also see the servo tray with holes for the swappable pod lugs. If I ever rebuild this plane I would move the servos as far forward as I could to help with the balance. Being a very snub nosed aircraft it’s been tricky getting enough weight forward to get it to balance.

Just like the FT Cruiser, the aileron servos are bedded into the bottom of the wing with the servo wires feeding through to the middle. 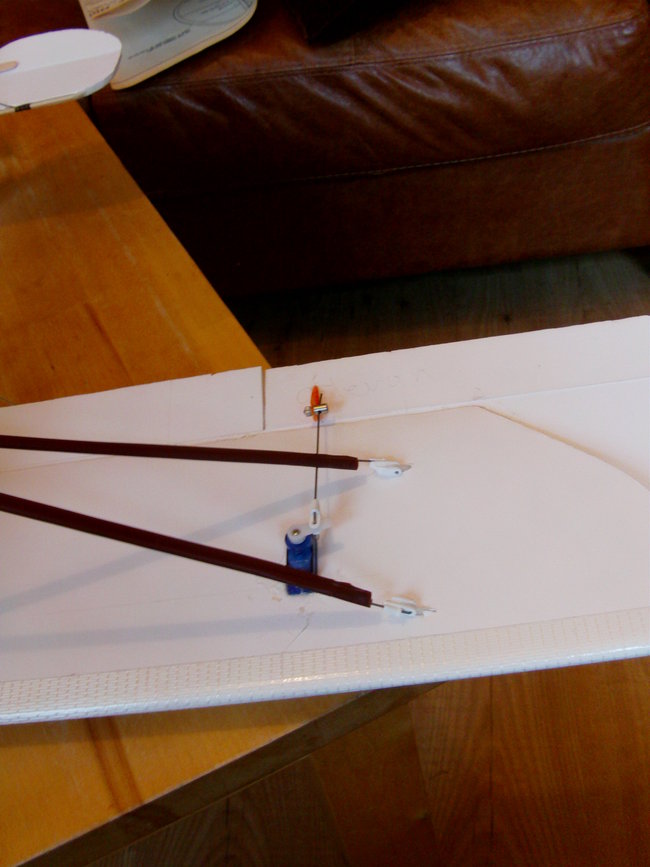 The radial engine was a bit of fun. I used cereal box cardboard for the cone and for the tubes that stick out to make the cylinders. I used the flexy bits from bendy straws for the cylinder detail. Loads of hot glue and CA helped stick it all together. It's held in place with little magnets. 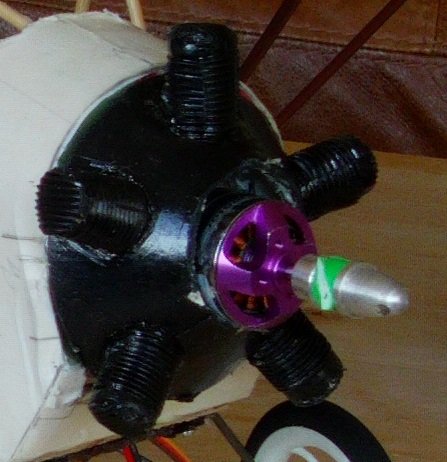 I copied the landing gear suggestion from the original build and used rubber band springing for the undercarriage (actually a twisted prop-saver). 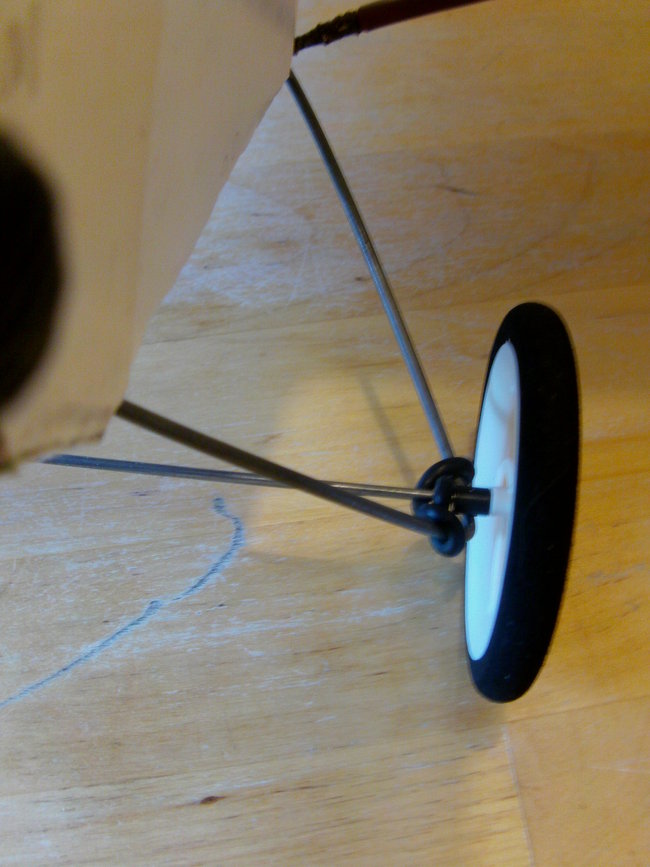 Initial covering is a double coat of odourless HAIRSPRAY. This is silicone based. It ‘showerproofs’ the paper and dries very fast.

The build article suggests an all-up weight of 29ozs – initially I thought I was coming in well under that but after adding balance weights it's near enough at that figure.

My first flights were a bit of a disaster as the plane was tail heavy. To address the balance problem I re-mounted the motor off the firewall on a stack of washers, and dropped some coins into the space at the back of the motor. I also shifted the wing back about 10mm. 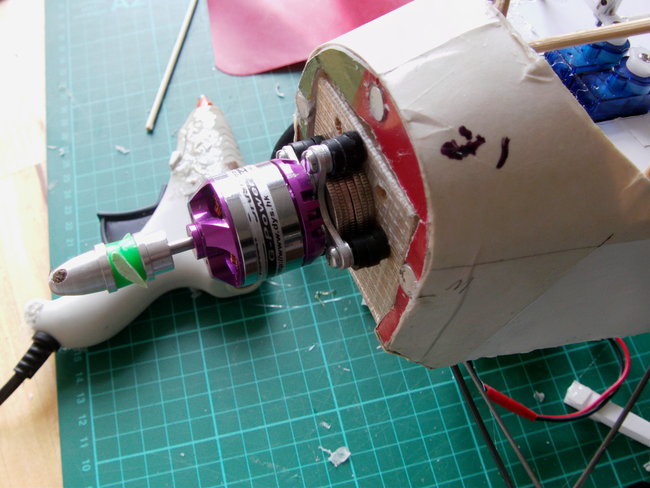 As you can see from this video - that did the trick! 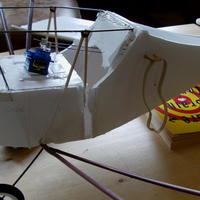 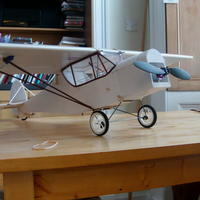 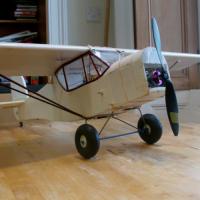 Zatoichi on July 13, 2013
Pretty darn slick! Nice work man.=0)
Log In to reply
jack111 on July 14, 2013
cool
Log In to reply
BuckE67 on July 17, 2013
Great Job!. Love this style of airplane!
Log In to reply
Firemoth on July 15, 2013
Very cool! You pretty much did exactly what I'm attempting to do with my Aeronca Champ Swappable! Great inspiration, and wonderful Article!
Log In to reply
alibopo on July 17, 2013
Thanks :) What I like is the way the existing FliteTest components can be adapted for other planes. My Baby Blender derived monoplane - the Tribewt - uses the BB wing and a reduced depth BB fuselage. The horiz. and vert. stabilisers are BB components with the profile modified. Having the gross dimensions already worked out makes things a lot easier for creating new scratchbuilds.
Log In to reply
gmyers2112 on July 14, 2013

plane build = cool
video = a giant field of white with a slightly less white object moving around at distance.
Log In to reply
alibopo on July 17, 2013
Hi - sorry - guilty as charged m'lord. I'll try and be more selective in future videos. I would have brought the plane closer, but I'm just getting the hang of it and I definitely felt more comfortable maintaining height. Maybe I'll edit the current video a bit more and replace it. Fair comment!
Log In to reply
alibopo on July 30, 2013
New video - hope that's more satisfying. :)
Log In to reply
RoyBro on July 15, 2013
Great model. I love the creativity in the making of the radial cylinders.

Log In to reply
alibopo on March 9, 2014
Thanks Mukhdi :) thanks for your comments ...sadly this plane is no longer this shape! But it did evolve into the morphocoupe - a high wing bush plane. I've had a lot of fun flying it in its different 'reincarnations'. Most recently I've added flaps, but the weather has been against me for a while now, too windy, so I've not been able to test it. Hopefully it will be a success, but you never know... I suppose that's part of the challenge :)
Log In to reply