We are so grateful for our Flite Test family and for how you all inspire us every single day to provide you with better content and ways to fall even more in love with the RC hobby. Because of how much you mean to us, we wanted to begin to highlight community members who have made positive impacts on not just us at Flite Test, but those who they interact with in the hobby.

With that being said, we are beginning an article series called "FT Community Spotlight." To kick-off this series, we want to highlight our dear friend, Dan Sponholz, AKA the Sponz. If you've ever used our free plans, it's more than likely the Sponz was behind it's details. Today we get an inside look at what has inspired him to be a part of Flite Test and RC. 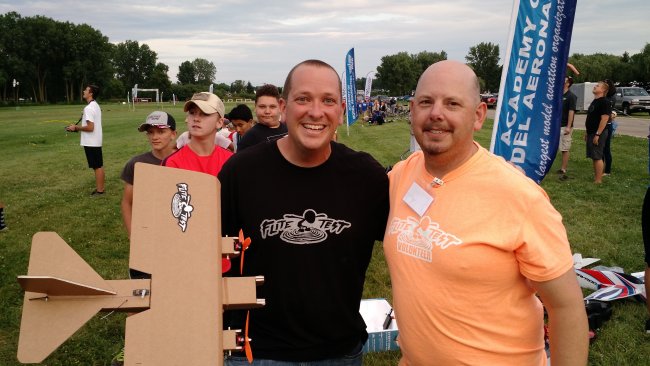 FT: What first piqued your interest in RC? Did anyone inspire you?

Sponz: I was interested in model airplanes from an early age. I couldn’t even tell you how many paper airplanes I made in grade school. Powered, model airplanes started for me around the age of 10 (circa 1979) when my brothers and I got our first cox .049 control line airplanes. We flew the plastic out of those things and we went through more of them than I count. A year or two later we found an old balsa .35-size control line plane at a rummage sale. It was in need of a little TLC to get it airworthy again. That plane reignited my dad’s interest in the hobby too. He flew control line planes with his brothers in the 50’s-60’s. It wasn’t long before my Dad, my two brothers and I were spending hours and hours building, flying and crashing together. Even back then, I always wanted to move up to RC, but it was well beyond our means financially. I stopped flying line control planes around the age of 17.

Fast forward about 15 years. My first foray into remotely controlling an airplane was an Air Hogs Intruder. It was fun for about 30 seconds. Then it was just frustrating trying to get it to actually go where you wanted it to, or even stay in the air. It only took a couple of weeks of frustration with that toy before I lost interest with it.

Fast forward another 12 years. My son Keegan has always been into airplanes (not sure where he got that from). I convinced my wife that we should buy Keegan an RC airplane for Christmas. He took to it very quickly. It wasn’t long after that when he asked me to check out this YouTube channel called FliteTest. So, after watching hours and hours of Josh and Josh goofing off and having a blast, I finally decided that this was my way into the hobby that had eluded me for so very long. I bought some Dollar Tree foam board, ordered some electronics from HobbyKing, and off we went into the wild blue yonder. That was almost four years ago, and we haven’t slowed down since. 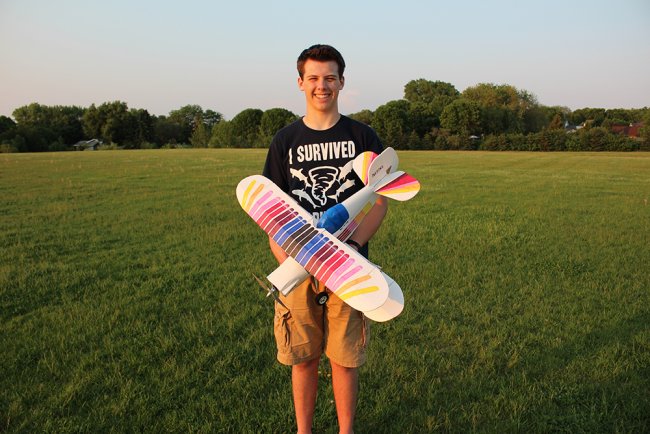 FT: What is your favorite part of the hobby?

Sponz: Do I really have to pick one? There are so many aspects of this hobby to enjoy, and I still consider myself very, very new to it all. I really am enjoying everything that I have been doing in the hobby, from scratch building, flying, FPV and combat to designing my own planes and drawing the plans. I guess if I had to pick just one “favorite” it would have to be streamer combat with my family and friends.

FT: What do you do when you’re not building/flying planes?

Sponz: Try to be the best husband and father I can be for my wife and three children. We love to go camping and travel together. I also work full time as a product engineer.

FT: What is your favorite part of Flite Test?

Sponz: The people. Josh says it all the time, but it’s not just words. There is a real sense of community and belonging with almost everyone that I have come into contact with in the Flite Test community. Everyone is eager and willing to share their knowledge and wisdom with compassion, understanding and kindness. The friendships and relationships that I have made through Flite Test have been truly amazing and life-changing.

FT: How have you experienced or seen Flite Test and the RC hobby positively impact you/the community around you?

Sponz: The biggest personal positive impact is having a hobby that I have been able to share with my son. I’ve also got my father, brother, and nephew into the RC hobby through Flite Test. I’ll keep working on trying to get my daughters to fly too.

FT: How has FliteTest or the RC hobby impacted your relationship with your son?

Sponz: Keegan and I have gotten to spend more time together, learn from each other (sometimes I think he has taught me more than I have taught him), and most importantly have a lot of fun together through this hobby. We’ve made memories that we will both cherish for the rest of our lives. 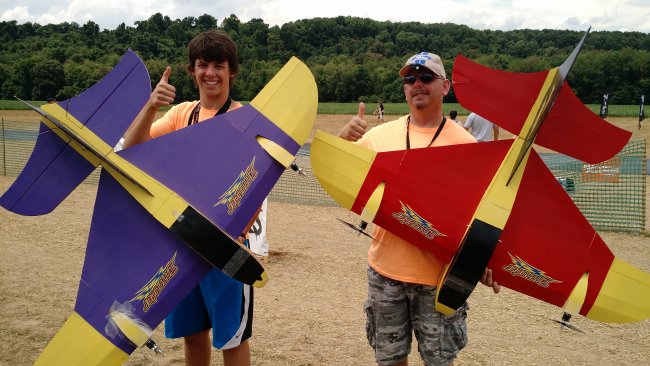 FT: What has been your favorite plane you designed?

Sponz: Easily the FT Bloody Baron. I designed the Baron to be a quick, easy to build, fun flyer that would able to take a few hits or rough landings without falling apart. I think I hit all my design goals with it. That design has opened so many doors for me in this hobby and granted me the opportunity meet and interact with so many people in the forums, at Flite Fest and of course, Flite Test. The original prototype that I brought to Flite Fest 2014 has been signed by almost everyone at Flite Test and is proudly displayed on my “wall of memories” at home. 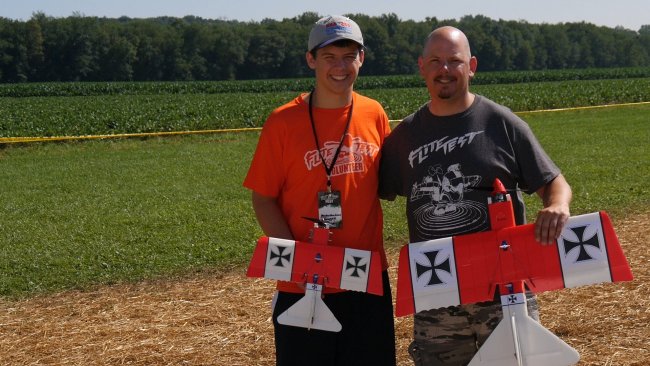 FT: What was your favorite plane that your son designed or built? With or without you?

Sponz: The Giant Air Hogs Intruder! Keegan was the one who came up with the idea to make a huge version of that first toy airplane I had back in the early 2000s. I did a very basic three-view layout of the plane in CAD, taught him some basic CAD commands, and let him have at it. It was a very proud dad experience for me. He did most of the work to get the prototypes up in the air in time for Flite Fest 2016. 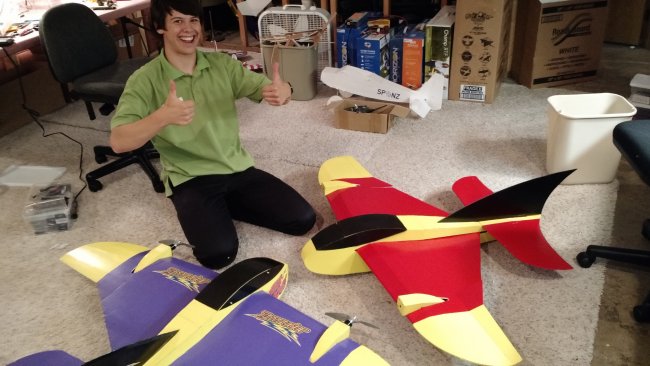 FT: How did you become the main driving force behind the Free Plans for Flite Test and the community?

Sponz: I owe a huge THANK YOU to Balu (a.k.a. Thomas Walter) for starting the conversation on the FT forums with his “Rearranging FT Plans” post. A lot of people voiced their opinions on how we (the FT community) could make the free FT plans even better. I was already working on my own designs and creating a format for my plans. I shared some of my ideas and incorporated a lot of other people's ideas based on the discussion that took place in the forums. That basic format has been evolving over time based on feedback from the community. I’ve literally spent at least 100 hours working on the CAD template and automating the process I use to create the PDF plans from the CAD files.

Starting in early 2015, I began redrawing and re-tiling the existing FT plans and sharing them on the forums. I was also drawing plans for my own designs, including the Bloody Wonder MkIII, Ugly Wonder and Bloody Baron. Another designer and community member, Alp, was designing some very nice planes, but was not able to create tiled plans. I offered to redraw and tile his plans for Corsair and AT-6. It was around this time that I created a forum post to have a single place to download all the plans I was drawing. The support from the FT community has been amazing. The plans have continued to evolve over time with feedback from everyone in the FT community. By the time the Bloody Baron was released I had the process down pretty well. When Josh saw my plans he really liked them and the Flite Test team used my plans as the official plans for the release. But, that’s not really when I started officially drawing the plans for Flite Test. 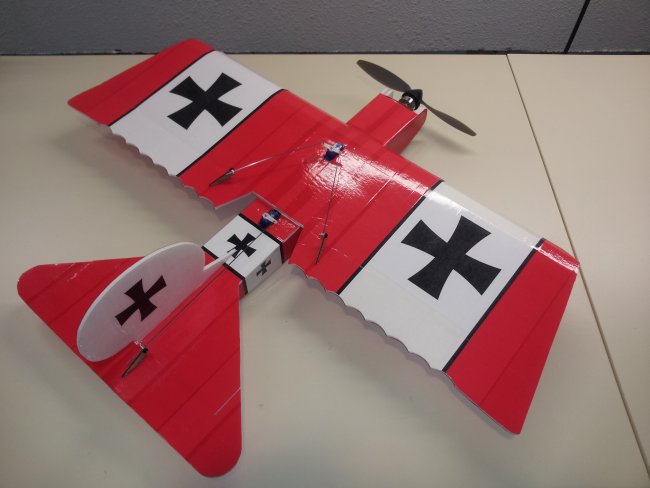 About a month later Peter’s FT Bushwacker was released. Like a typical FT junkie, I was constantly checking the Flite Test FTP site for the plans to show up. When they finally did, I immediately began redrawing the plans. I was pretty excited to build my own so I pulled an all-nighter and had the redrawn plans posted about 12 hours later. As it turns out, there were some issues printing the original FT plans, and people were posting about it on Facebook. My plans got shared in that Facebook post and I got an email from Alex that day asking if I would mind if they linked my plans to the build article instead of the original Flite Test plans. I said yes, of course! But, then I realized that I never really asked anyone at Flite Test for permission to redraw the plans. So, I sent an email to Josh apologizing for not asking permission sooner and to see if they were okay with it. Turns out, not only were they okay with it, Josh asked me if I wanted to create the free plans for Flite Test for the future FT designs. The FT Bushwacker was my first official release back in October 2015. I feel very blessed to be given this opportunity to give a little back to Flite Test and the community. 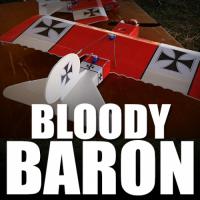 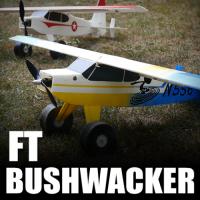 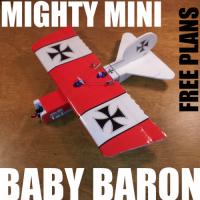