I'm very new to the whole scratch building thing. This is, in fact, the very first plan that I've done. Yay!

Version 1 would give you a more tail heavy experience, so I left it in the article for anyone who might be interested in that. :D

I live in the Philippines. And quite frankly, this hobby of flying isn't exactly that popular. So hobby shops tend to have very few stock on many items. Smaller propellers tend to be on very short stock. Since I'm still learning how to fly, I wanted to make a pusher style plane. Having a hard time picking a design, I decided to make a fusion of sorts. Hence, the Bixler-style nose for the FT Tiny Trainer.

So please, go check him out!

Instructions are simple, if you're familiar with how to cut out and assemble Flite Test plans then this should be a no brainer. :D

But for those who are unfamiliar:

If you haven't already, make the fuselage, tail, and wings (either one should work fine) of the FT Tiny Trainer: 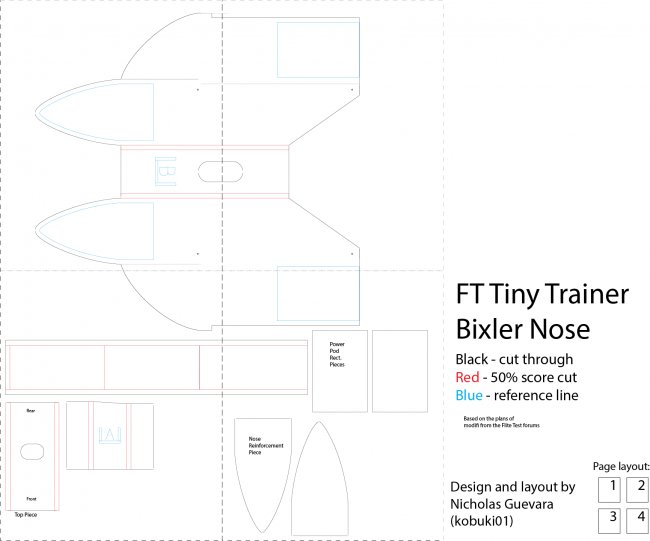 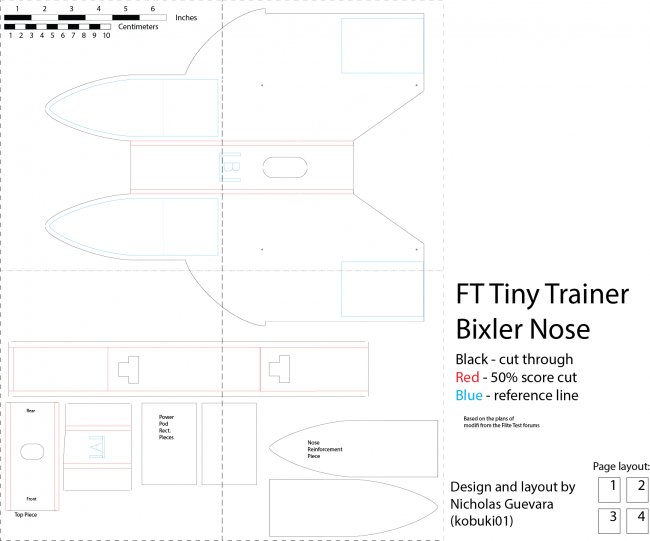 (Note: All pictures are of Version 1. Version 2 is assembled the exact same way, so don't worry :D)

Cut out all the pieces and let's start with the biggest piece.

Before folding the "B" fold, glue into place the nose reinforcement pieces and the power pod rectanglular pieces on to the reference marks.

Glue the "B" fold like how you would the Glider Nose of the Tiny Trainer.

Glue the top piece, make sure you have the orientation right. Otherwise the holes for the servo leads won't line up. Make sure you glue on the foam, not the paper.

Glue the canopy cover. I designed this to open up so you can access the electronics.

(Please note that this nose is the prototype version. But is more or less going to come out the same) 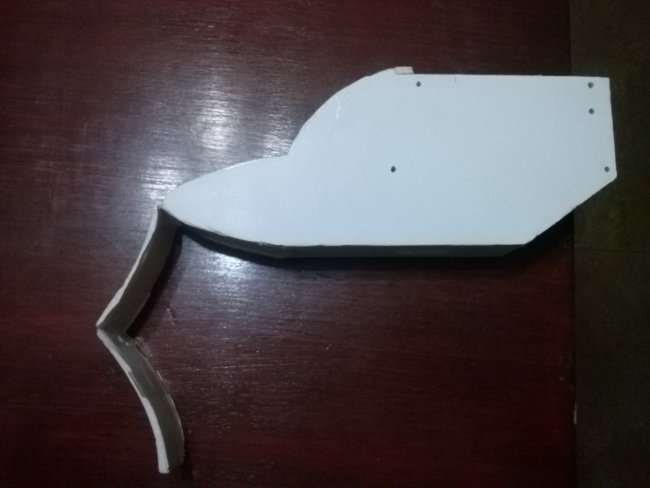 Start by cutting out the piece, placing score and bevel cuts, and peeling the inner layer of paper. This is important so you can form the foam to the curves of the canopy.

I suggest reinforcing the joints by making a hot glue hinge and then adding tape on top of the hinge.

Start at the bottom, glue the little tab i made to the bottom of the Bixler Nose. This will act as your anchor. Then glue up to the tip of the nose ONLY. 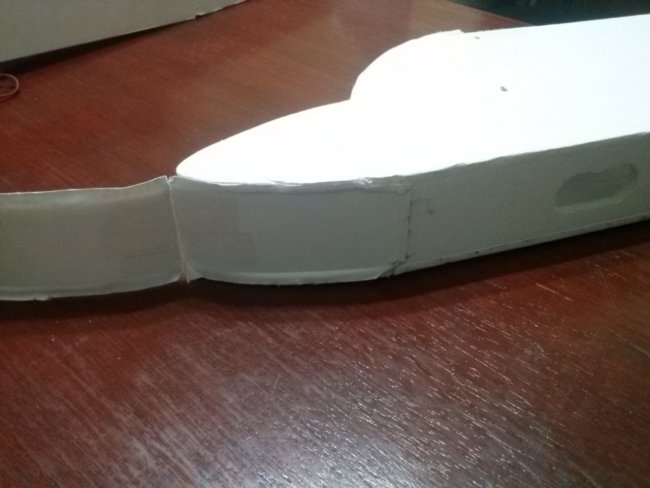 Lastly, you can make a tape lock for the canopy and cut out the "T" ventilation holes. I made three locks in mine. One on top, two at the sides. 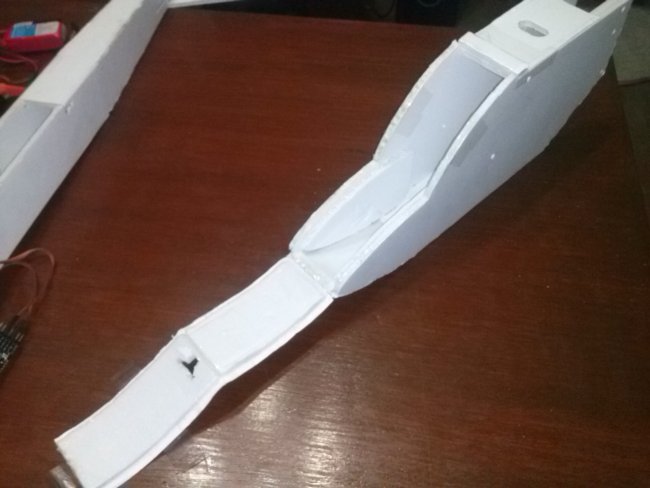 Use BBQ skewers to fix everything in place

Place the power pod at the back. I haven't placed any reference holes for this because I'm not yet sure what the angle should be like. This is where a little trial and error will have to take place. I'm using a single BBQ skewer here (the lower one) to anchor the power pod and a rubber band to fix the angle. The upper one isn't attached to the power pod, and will be used to mount the wing.

UPDATE: I ended up gluing the power pod to a permanent angle. After a few crashes, the holes get bigger and allows the propeller to hit the fuselage. :\ Something you might want to consider. :) If you want it to remain swappable, try using some giftcards as hard points! I've seen several articles about how you can go about that. :D 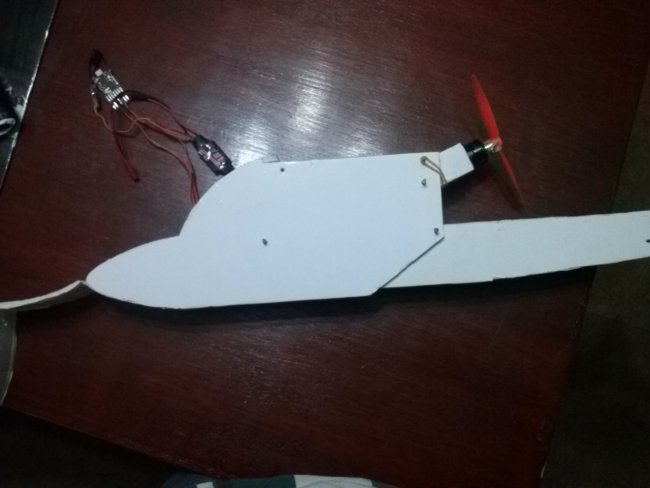 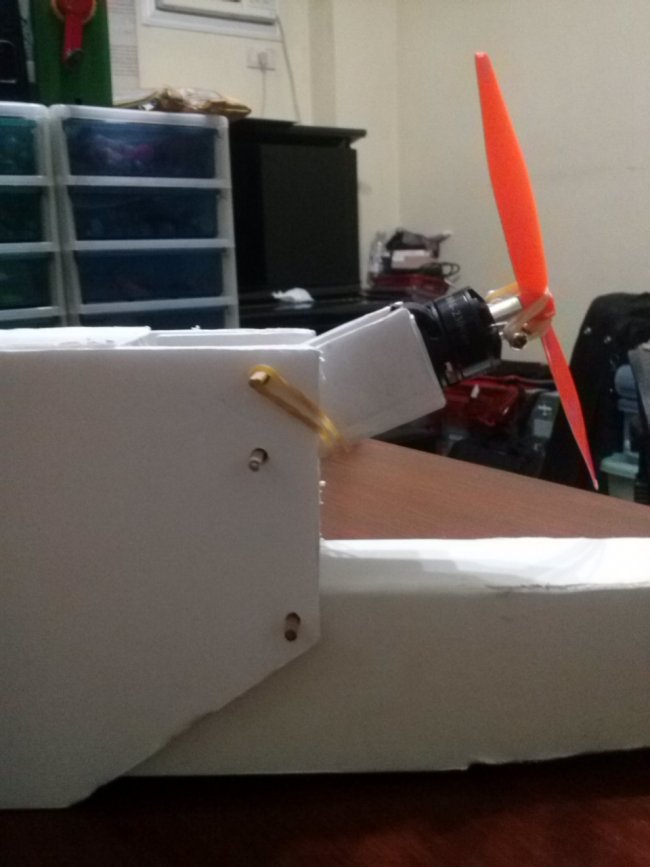 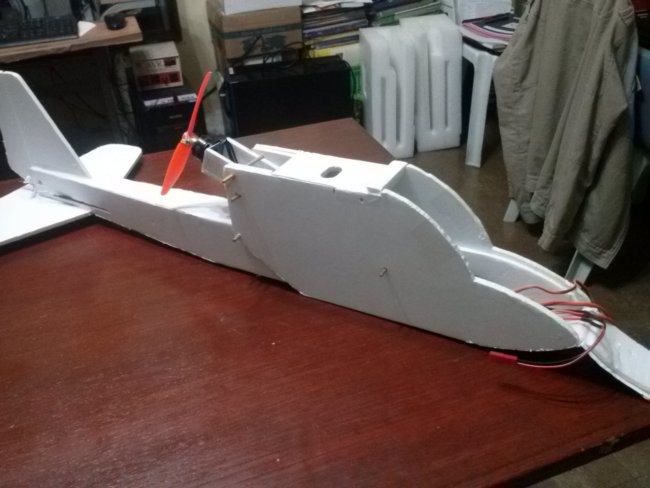 UPDATE: if you're using Version 1, make sure you line up the TRAILING EDGE of the wing to the rear of the Bixler Nose. 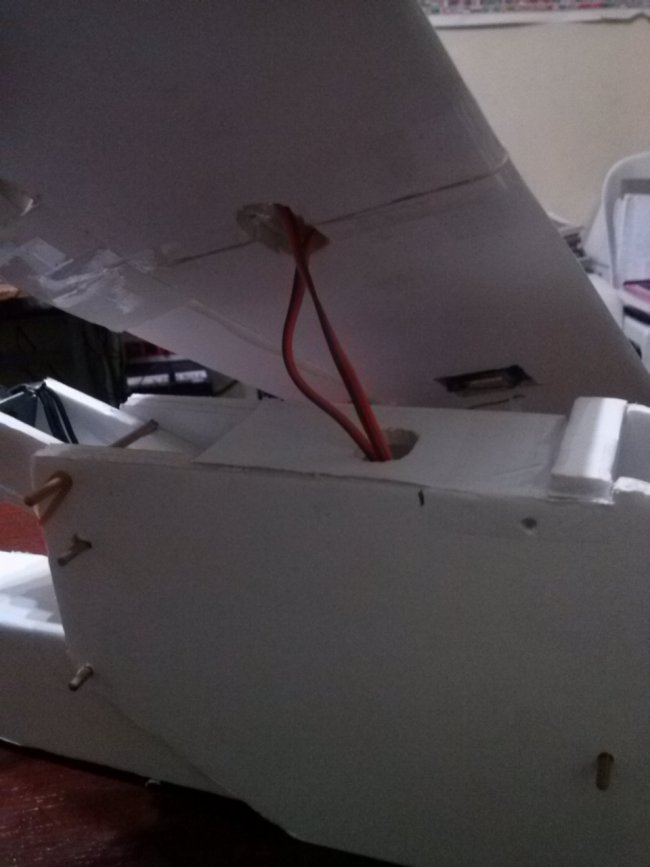 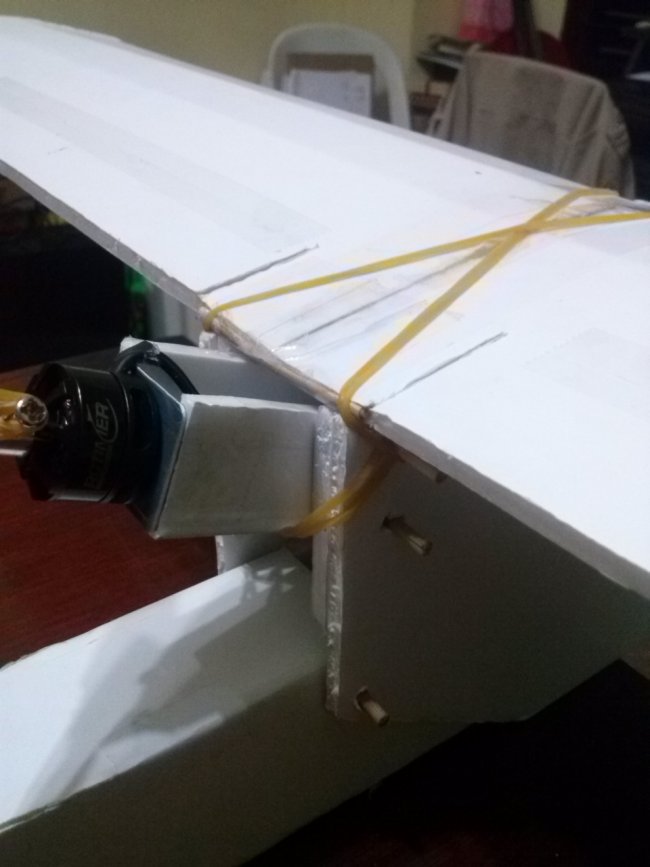 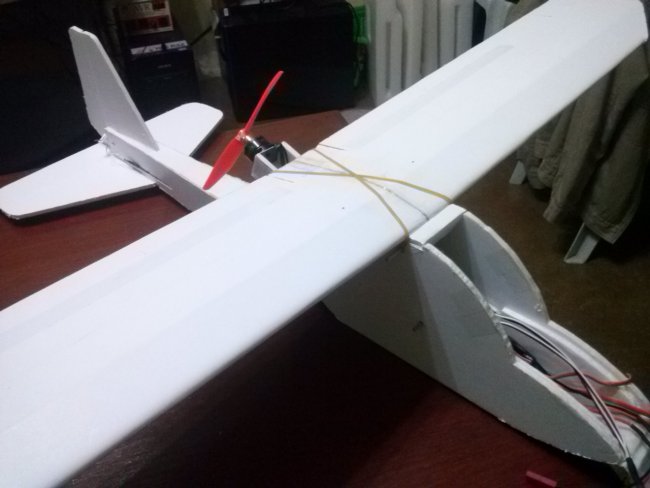 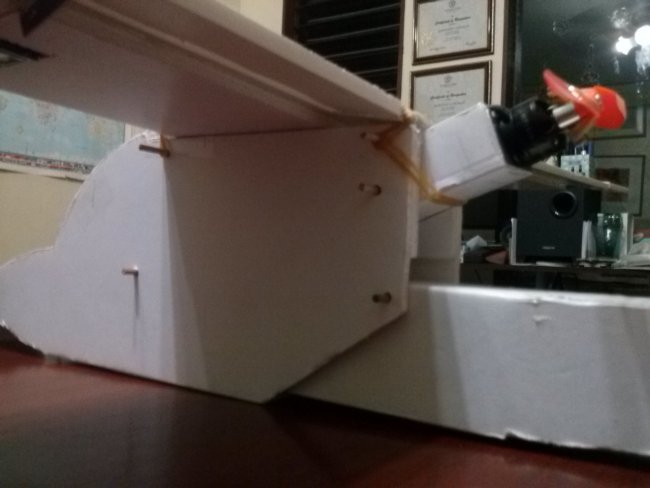 And that's it. Just plug your battery and fly!

I uploaded here the Version 2 of the Bixler Nose! See the top of the article. Same steps to assemble. I solved the CG by making the nose an extra 2 inches longer. I used a 3s 1000mAh and it became slightly nose heavy, but flew SO much better. :D

Thanks guys! Have fun flying! And God bless you! :D 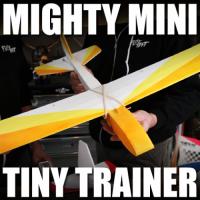 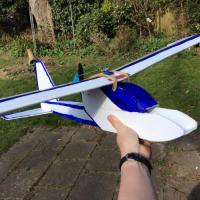 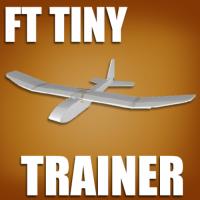 Log In to reply
caleb_rc on June 25, 2015
Awesome idea! I just built my TT and have been having problems with my props breaking when belly-landing... This looks like a great solution! Definitely on my list of things to do.... Will be my first time scratch building.. Can anyone link some good articles about building from plans? Much appreciated.. Thanks again!
Log In to reply
kobuki01 on June 26, 2015
I don't have links to any tips at the moment, but i'm certain there are plenty out there. :)
But I can give some of my own tips. After printing the PDF file and taping the pages together, cut them out of the paper before placing them on the foamboard. This will allow you orient each piece in such a way that's most economical for your foamboard. Also make sure you give some allowance as you cut the plans out of the paper - don't cut on the lines themselves just yet. This will allow you to see the lines a lot clearer as you actually do cut the foamboard already.
I can't think of anything else at the moment, but I hope I helped. Have fun! :)
Log In to reply
caleb_rc on June 26, 2015
Thanks kobuki01, will do.. Hopefully I can get started on it pretty soon.
Log In to reply
caleb_rc on June 26, 2015
Just finished cutting out all of the pieces... It wasn't bad at all... Just need to glue everything together now..
Log In to reply
flyer135 on June 25, 2015
to print it double click on the picture of the plans and once you get to the picture right click on it and save it, once that its done it should be able to be opened as a document, depending on the computer and programs you have.

Log In to reply
caleb_rc on June 26, 2015
Is there enough room for a 6 inch prop? I know in the article is says 5-6 inch, but I was wondering if a 6 inch would fit for certain because as of right now I only have 6x4.5 props..
Log In to reply
kobuki01 on June 29, 2015
I'm pretty sure you can fit a 6-inch prop in it :)
Log In to reply
scott firman on June 26, 2015
Im not crazy about the design but I think I will go ahead and download the plans.I may modify it somewhat because of the Power pod placement.It might be easier to incorporate a permanent motor into the design. It makes the wheels inside my head go hum.
Log In to reply
scott firman on June 26, 2015
I found it easiest to spray the foam board with a tacky glue called loctite spray adhesive.let it dry slightly and attach your plans.If you let it mostly dry and spray it on really lightly you can cut out your plans and just remove the downloaded plans.Or leave them on permanent and use as a master template.like I did. I have masters of all my down loaded plans.
Log In to reply
flyer135 on June 27, 2015
I got a re-positionable spray glue and it works awesomely it can be removed even after 40-50 min,i recommend spraying it as lightly and evenly as possible, I plan on making an article on tips for scratch building, here is a link to the spray http://www.michaels.com/aleenes-repositionable-tacky-spray/10189004.html#q=Aleene%27s+Repositionable+Tacky+Spray&start=1
Log In to reply
caleb_rc on June 27, 2015
Just finished building, and CG is going to be quite a challenge... It is extremely tail heavy even with a 3s 1000 battery and 7 penny's shoved up in the nose.. I used Winglet's servo mod which has the servos mounted outside on the tail, I understand that this is the problem but I don't want to move the servos back to the original position because 1. I would have huge holes in the sides 2. The TT would be nose heavy if I use the original powered nose... Any suggestions? Should I keep adding dead weight in the nose? Any help is appreciated! :)
Log In to reply
kobuki01 on June 29, 2015
I'm not familiar with Winglet's servo mod. :( My configuration with the servos was based on FT Tiny Trainer plans. But adding weight to the nose shouldn't be much of a problem. I saw some people actually add an FPV camera to the nose of their designs and it flew beautifully. :)
Log In to reply
flyer135 on June 27, 2015
I just finished as well, I went by the cg line recommended with the regular version and with a 3s 1000mah it was perfect, i am using the 3 channel wing and I plan on making the 4 channel win very soon, when I maiden it I will let you know right away how it went
Log In to reply
danield on June 28, 2015
Plans look good, but where is the scale?
Log In to reply
kobuki01 on June 29, 2015
The scale is pretty much the same scale that's in FT plans. :)
Log In to reply
flyer135 on June 29, 2015
just barely flew it with the 3 channel wing, no sideways thrust angle and a 3s 1000mah battery, I had a bit of a problem, it wanted to nosedive not angle up, next time I fly I want to either try different batteries or adjust the down thrust angle, your welcome :)

https://www.facebook.com/photo.php?fbid=1168464943170972&set=a.461881210496019.127958.100000224330228&type=1
Log In to reply
cgcmhob303@gmail.com on July 18, 2015
Do you use the Squared end or the angles end of the powerpod?
Log In to reply
kobuki01 on July 21, 2015
I used the angled end of the power pod. :) I've an updated PDF that fixes that CG problem, i'll edit this article in a moment. :)
Log In to reply
kobuki01 on July 21, 2015
Updated the article! Now has Version 2 of the Bixler Nose! Enjoy everyone! :D
Log In to reply
paultbg on September 8, 2015
What size prop are you using in the picture? I've tried with 7x3.5 but the down thrust it's quite strong because of the angle needed.
Log In to reply
kobuki01 on September 9, 2015
I'm currently using a 6x3 prop. :)
Log In to reply
esteamedpunk on September 23, 2015
I Bought the tiny trainer speed build kit and after three hand launches and three broken props in less then an hour I was stuck. I found your plans and gave them a shot. While i could keep it in the air it was a blast to fly. I finally broke my last prop when I landed too hard on a belly landing and the prop slammed into the tail section. I was wondering if there will be new plans at any point that help with where to mount the motor? I felt like I needed way too much throttle to keep it in the air (almost full at take off and 3/4 while flying. Any less and it would sink fast). I hopy you keep working on this so when i can get more props I can try it again.
Log In to reply
kobuki01 on October 6, 2015
Hey! I'm glad you like the plans! I actually came up with a way to semi-fix the motor by using popsicle sticks, a bbq skewer, and some old credit cards. I just haven't had the time to write down the steps. In the next few weeks hopefully I'll have time to upload it. :D
Log In to reply
oregonflyer on November 10, 2015
hey i am sooo happy someone decided to do this!! thank you soo much for the plans bud!! cant wait to fly it
Log In to reply
MohanMaker on March 30, 2019
Great design! Thank you. I cut out my foamboard parts on a CNC machine with a needle cutter (I use the MPCNC from V1engineering.com) so I combined each page of the plan (v2 version) into one dxf file for cutting. In case anyone wants the combined version, you can get it here.
https://drive.google.com/file/d/1r8nZUe8ze4iA_hgRitcEj-uPj4JA6km2/view?usp=sharing
Log In to reply 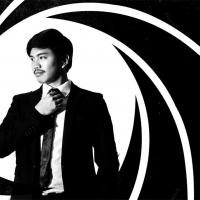